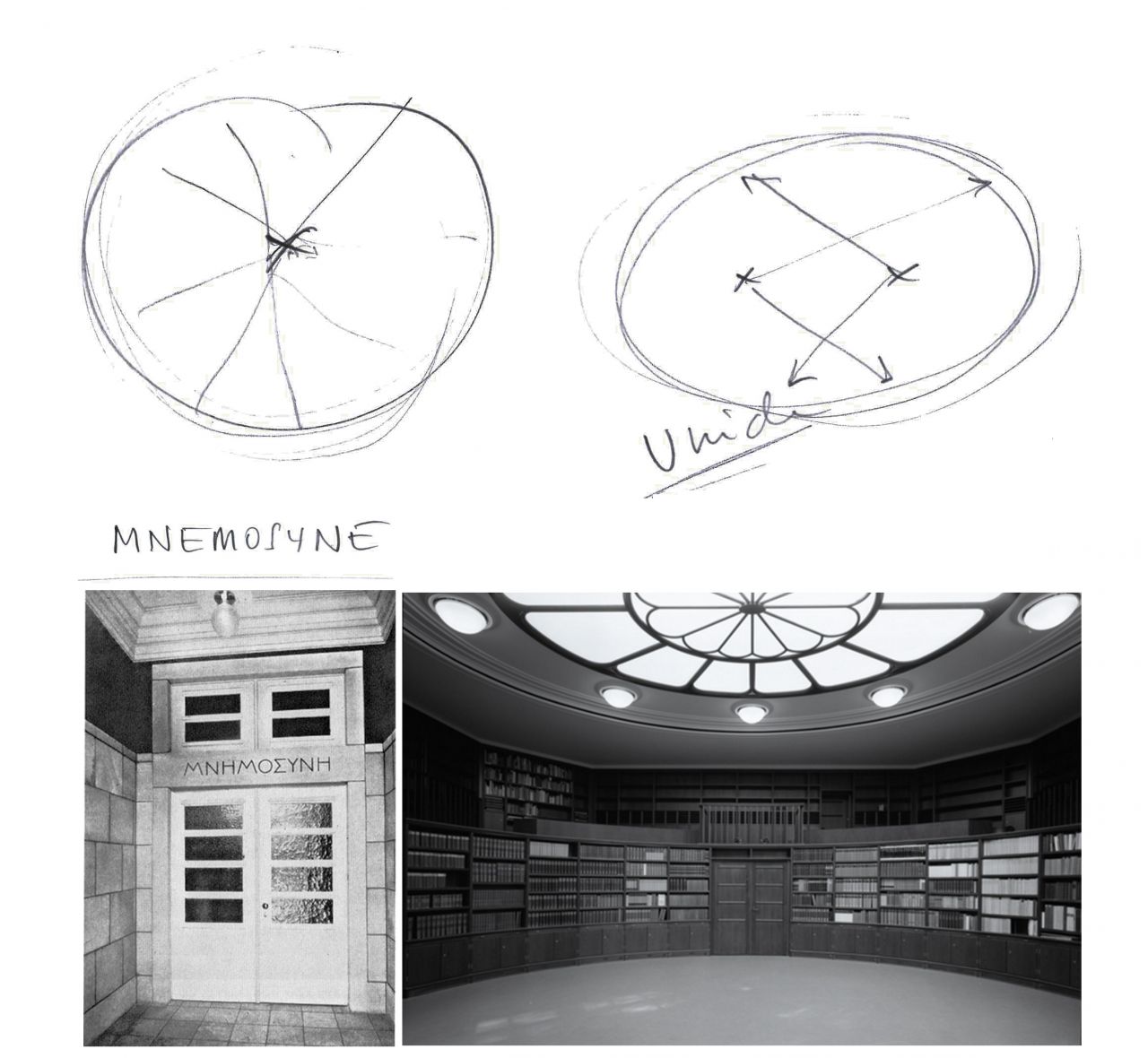 “It is urgent to reconnect the architect with the philosopher …”

Interview with Alfons Puigarnau, Professor of thinking at the UIC School of Architecture in Barcelona 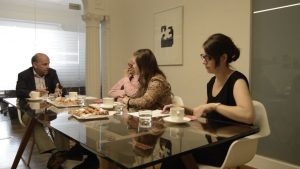 Alfons was born in Barcelona (1968) to a family of entrepreneurs. He studied at UAB and began his Bachelor of Science and medicine, but after six months decided to leave and start studying Art History at UB (1987-92). In his first year, I realized that I didn’t understand what was explained there, and I had the impression that excessive importance was given only to the formal aspect of the work of art, so he decided to supplement his training with a more analytical view that could offer him a career in Philosophy.

Upon completion of both degrees in five years, thanks to a more multidisciplinary path, he sought to use philosophical concepts as a hermeneutic lever on the world of the artistic image. A mere painting of a child with a broom between his legs was, in his narrative imagination, a meditation on the Toy horse, and could be Napoleon, Carlos V, or Don Quixote. What a difference between nineteenth-century positivist formalism and the freshness of such symbolic and philosophical interpretations! (E. H. Gombrich).

After obtaining the Extraordinary Prize in the race (1993), he began writing his thesis in the area of thinking UPF. It was at this time that he met the Spanish philosopher Eugenio Trias and the Catalan esthete Amador Vega, with whom he would work with between 1995 and 2001. That experience taught him to “think philosophically” and peaked his interest in discovering the relationship between art and Western neo-Platonic tradition.

From the educational point of view, he began to use the classic triad of transcendentalism, beauty, and well truth to teach students of Humanities how to decrypt the apparent fragmentation of knowledge through transcendental Absolute Unity.

He obtained his doctorate in 1999 and, simultaneously, began to teach in the Faculty of Humanities at UPF and the School of Architecture UIC Barcelona, where he taught aesthetics, theory of art and architectural composition. In 2001, he was appointed Adjunct Professor full-time in the area of thought at UIC Barcelona.

This man, with his weary and penetrating gaze spends almost twenty years tirelessly talking to architecture students about what is beyond space and physical appearance and the difficult relations between thought and architecture. Constantly publishing his aesthetic meditations and looking at us with sympathy waiting for our daring questions.

What two concepts or ideas are you trying to convey to future architects?

First, let us make an effort to think philosophically. Let’s see. The observation of the different things around us leads us to think rationally that there is something common to them: all “are”. At the same time, is also seen in them something different every time and gradually what we call “transcendental”. There are three transcendental of Being: truth, goodness and beauty according to various degrees. These three transcendental are accompanied by a transcendental Absolute Unity. If each of them were out on their own, without the unit, Being would disintegrate immediately.

At the same time, the masterpieces of architecture enjoy Being in a particularly intense way. For example, the Bruder Klaus Field Chapel of Peter Zumthor (2005), that I have been able to visit recently, is at once beautiful, good and true and above all, has unit. It is the doctrine of transcendentalism being applied to a small building which belongs to the most rabid Postmodernity. It is urgent to return to connect the work of the architect with the philosopher, the construction of the space with the metaphysical discourse.

Based on these concepts, what I would like to instill in them is the importance of the word and learn how to taste it, since architecture is the word pronounced space. There are buildings like the Pantheon in Rome, expressed in a paradigmatic way, in such a way that its own oculus represents the word of reason.

Meanwhile, it seems that in the architecture of Frank Gehry, Richard Meier and even Enric Miralles, the word has been made entirely, being reduced to monosyllabic. In its harmonic formal disorganization, Santa Catarina market (1997-2005) could compare to what was happening in the story of Jorge Luis Borges the library of Babel (1941), in which every 300 years a librarian opens up a book at random and find a phrase with meaning “Oh, your pyramid time!” It may take years to find another readable expression. This is how Borges explains that in my classes would call a “transcendental philosophy crisis” which makes us worried about the current landscape of globalized architecture.

Second. For me, another fundamental point in the formation of the architect is the education of the eye.

The young architect must be taught how to look, to make him understand what is projected. And projection is nothing more than making the air visible. In one of my courses, architecture and suspense relates to the filmography of Alfred Hitchcock and its connection to the music of Bernard Herrmann. In this symbiosis suspense it is analyzed from the perspective that architecture is a perfect crime, where space must have a point of perversion that makes it exciting.

Architecture needs an element of fiction, such as for example which we encounter in your building at Muntaner street 529 (2008) where Wortmann Architects displays a visual language, practicing a kind of fiction in a residential building like Josefa López (1930-31) located at Muntaner street 342, by Josep Lluís Sert. The ceiling of your facade shows how you have used the golden ratio, where this is repeated and broken at the same time. Beauty, writes Edgar Allan Poe, is the breakdown of repetition.

How would you define or appoint the style of our time? Do you think that one can speak of a style?

Your question is very difficult to answer. Let’s go step by step.

The modern movement in architecture was characterized by simplification of forms, the absence of embellishment, and the conscious rejection of the classical academic composition. Postmodernism reacts against that rational-functionalism, also called style international. Forms and formalized functional modern spaces are replaced by different aesthetics: styles collide, form is adopted for itself and the new ways of seeing familiar styles and space abound. Postmodern architecture is also defined as “neo-eclectica” where the reference and embellishment have returned to the facade, instead of modern aggressive styles without adornments. This eclecticism is often combined with the use of non-orthogonal angles and unusual surfaces.

According to Charles Jencks (The language of postmodern architecture, 1980), the symbolic end of the Modern Movement and transit postmodernism occurred at 15:32 on July 15, 1972, when the Pruitt-Igoe housing complex in St. Louis (USA), designed by architect Minoru Yamasaki in 1954, was dynamited and deemed uninhabitable.

Until the crash of 2007 there was a kind of postmodernism that had been called “Iconic architecture” in reference to the visual abuse that the deconstruction architecture had incurred. Until then, the system’s architecture was nurturing a “Star System” of architects who, through their “icons”, built projects applauded by a mass society that is admired by the luxury and the banality.

However, it seems to me that after the excesses of this iconic architecture something pure forms, with a more essential air. There is a return to the rational-functionalism of the interwar period. This return to the essential is produced by a question of economics, also in the sense of simplicity in the execution of complex ideas; turns to the purity of the space and to see mankind as the eye sight. I do not mean here the binocular eye, but one eye, that camera obscure which has a single point of view in its interior, where we find the projection of the reality upside-down.

The modern architecture is already a classic style. Postmodernism has also given works of architecture which, despite its Baroque style, have become classics. Among, undoubtedly, a period of crisis cultural, where I call the style predominantly a species of “eclecticism futuristic”, i.e., a complicated mix of nostalgia by the past and of certain fear to the future. However, I see possible to regenerate the speech if we are able to tackle a serious reflection that mixes the permanence of the Transcendentalists with the instrumentality of the technology and the universality of the globalization. The architect shall be a man of action but, above all, a great thinker.

What is your next project?
I will spend six weeks participating in a seminar at the School of Theory and Criticism at Cornell University (Ithaca, New York) entitled Seeing Madness: Insanity, Media, and Visual Culture. There we are going to use the History of Folly by Michel Foucault as base material. In this seminar we will work on the construction of a visual atlas of madness, which will be hung on one of the walls of Cornell University. We will use the notion of MNEMOSYNE that BBY Warburg, founder of the historiography modern of the art, put up in his Kulturwissenschaft Bibliothek in the city of Hamburg in the last 20 years of the last century. He represents modernity on the floor of his library which, instead of being circular in shape is an ellipse that has two eyes in such a way that it offers a kaleidoscopic view of the truth through two centers of curvature. In reality, it raises a new cultural model based on the perspective of the historian on the image. It will be fascinating.

The time has flown by. Evening falls on the Wortmann Architects offices as we come to a close. You hardly need coffee, and without realizing it, Alfons has been discussing a lot of issues that concerned us. Many of them questions that we had prepared, but did not think we would be able to get to them, but in fact he has answered them all. We have enjoyed thinking together and chatting quietly about many topics.

Thank you very much, Alfons.

Thanks to you. I felt very much at ease. We’ll see you soon.