When the AMI chose Barcelona as the next for the annual Summit, we were very enthusiastic (see the previous post).

It has been an honour to introduce our city and guide a group of the best international marketers in the architectural field. Barcelona is a melting pot of cultures and an architectonic journey through social and political changes. The “Barcelona experiment” for the Olympic Games of 1992 has been a global reference. 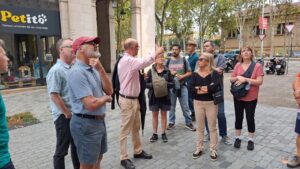 In Barcelona, it was not a sum of many sub-projects that was carried out, but rather an orchestrated interaction of diverse interests that led to the realization of a new urban form as a living organism. A polis, in the best meaning of the word, was created by adhering to self-imposed rules and democratically legitimized power. In this context, the statements of Pep Subirós, who, as a philosopher, ideologue of the town hall, and functionary of the Olympic organization, is of great interest, accompanied the “Barcelona experiment” throughout its duration.

“In a time of crisis of ideologies and distrust of global discourses, the form is no longer something important, but it becomes the decisive criterion altogether. The architect as an urban builder – as a designer of space – appears as the last refuge for meaning and utopia. The ideological substrate is the architect’s trust in the power of designing the city as an enabler of social relationships, in the ability of beauty, urban symbology, and iconography to create sensuality, identity, and cohesion. By artistically shaping space, the architect also intends to model the soul and sensibilities of the urbanite.” (Pep Subirós: El Principe y el Arquitecto, in the daily newspaper “El Pais”)

You can download here below our architectural guide of Barcelona “Metamorfosis and Transformational Architecture”.