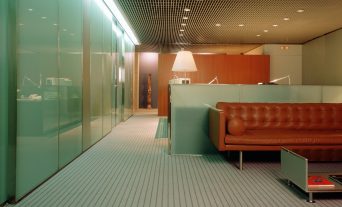 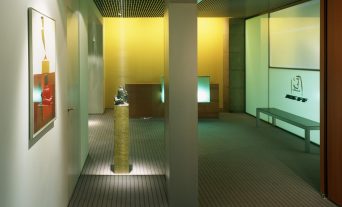 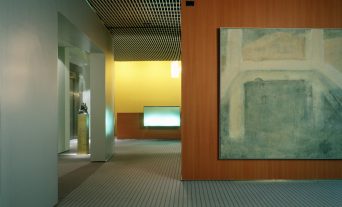 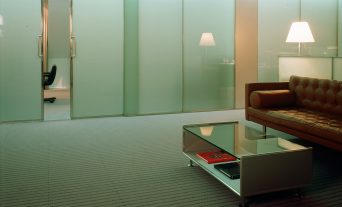 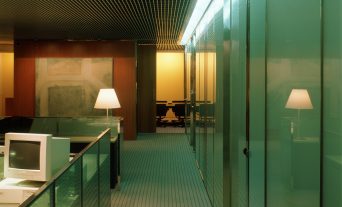 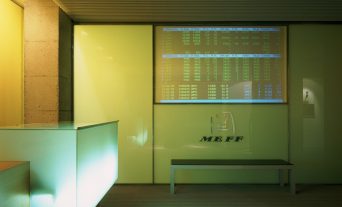 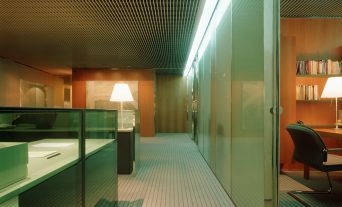 As a counterpoint to a company whose existence is almost completely restricted to the virtual world of electronic money and financial transactions and whose physical presence in the stock markets is a mere flashing of lights on a control panel, W&B proposed a sensory rich work space.

In contrast with many current designs, which aim to communicate a sense of modernity through focusing on the virtual reality of a company’s work, this proposal sought to emphasize the needs of the user by creating a space which would provide a sensory rich experience. A fundamental principle of this project was to create a contemporary office that would respond to the genuine needs of the end-users and to avoid the facile reproduction of an information technology inspired aesthetic.

The prominence of computer screens and the intangible activity of this company have been interpreted through the incorporation of polished surfaces and translucent glass creating an effect of ambiguous reflections and a playful movement of light. The entry hall of the company is equipped with a screen in which the real time fluctuations of the market are displayed.

The carpeting which imitates the structure of the false ceiling, the play of light and shade in the opaque glass panels, the rough texture of the cement columns are all examples of the desired aesthetic. In spite of the importance of technology in the day-to-day work of this company, the interiors achieve a tranquil, domestic image, blending materials to create a sensation of comfort and empathy between the space and its users.

The use of tones of lilac and yellow in the master walls suggests a light tension, and the contrast with the walls of metal and glass creates a sensation of fluidity and movement.

The original building, dating from the beginning of the twentieth century, provided little natural light. To compensate for this, translucent glass panels were used to separate spaces allowing light to pass between the different areas without causing unwanted reflections on computer screens. A noteworthy feature of the project is the double-skin opaque security glass partitioning supported on a metallic structure.